I did this race back in 2010, and along with the top 10-20 of so runners, we all went walk-abouts and made up our own extended version of the race. I eventually finished 99ths in something like 63 minutes, so I was quietly confident I would perhaps “pb”.

Upon arriving at Rivington Top Barn, it was absolutely pouring down, and had been doing non-stop all day. I stayed in my car till it was times to warm up, said a few hellos and joined the start line.

At just under 6miles with just under 1000ft of climb, it’s a fast one! Up the cobbled road, along some tarmac and you start the first climb. Its entirely runable but its abit of a bugger so early in the race. I was lying in forth at the base of the climb, but I noticed the chap who was in 2nd be passed by the young lad in a bright yellow vest, and seized the opportunity to try and beat him mentally early in the race and also overtook him – It worked because I never saw him again.

Once you’re at the top, you take a right turn before the Pigeon Tower and run along the cobbled Georges Lane. It turned out to be more like a river with the huge amount of standing water. From here onwards I ran my own race. 1st and 2nd were too quick for me and pulled ahead, and I couldn’t see anybody behind me. 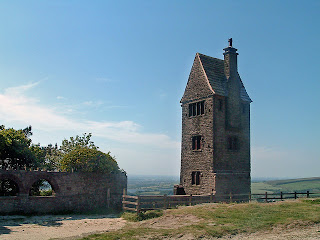 The next climb takes you to the summit of Winter Hill. It’s a grassy climb and again its runable, but your mind wants to you quit and walk. I was starting to pull back the race leaders and I kept pressing on. By the time I got to the top I was knackered and had no option but to let the leaders zoom off whilst I tried to get the legs to recover and refill the lungs with badly needed oxygen.

One the top the weather was pretty grim. I wore a tshirt under my vest and the tshirt was completely saturated and starting to feel heavy. From here onwards you follow the road for a while, passing the Scotsman's stump which acts as a memorials to the end of a certain Mr Hendersons I do believe? Down the road, across the cattle grid and then back onto the bogs. 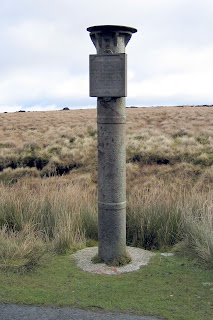 By this point my glasses were in badly need of windscreen wipers. A marshall told me to “head straight for that landrover” in the general direction of Two Lads Stone…but I couldn’t see a bloody thing let along a landrover. I stopped for a minute, took my glasses off and scanned the distance and clocked the big white landy with its lights on…deeeeeer!

I had abit of confusion whether I should actually go over Two Lads, but I did anyway. Then its quite a nice speedy descent down to the cobbled track again, and start the run to Rivington Pike. 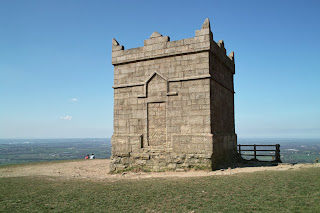 The climb up to the Pike is always a tester, and again your mind tells you to  give in a walk, but you just bully yourself to keep running. Around the pike and down the side, before making your way back to the Pigeon Tower. The descent down from the Pigeon Tower is a beaut. Its abit twisty and lined by trees so it will hurt if you get it wrong, but I tried to bomb it regardless…and after a few twists and turns back to the finish.

Ps - The images are from Google - there was one hardly photographer on the route but I havent seen them uploaded anyway where.
Posted by Unknown at 09:19