I did this race back in 2010 as one of my first fell races and since its close to home it,  has a special appeal to me, as many races appeal to other runners for similar races.
Starting from the small village of Belmont near Bolton, the race is a good little tester. At a mere 4.5 miles with around 1000ft of climbing, it’s a short race that tests your all-round fell running capabilities.
I won’t go into it, but I have been away from the fell running scene for nearly two years now after a nausea problem whilst running, which caused me to pack in running altogether.
Many frustrating months down the line, Im back running again. February 12th 2012 to be precise. My good friend Mark Birkbeck called me up to give me some encouraging words that he’d heard that the usual Belmont favourite; Mr Darren Kay wasn’t doing it this year, so the doors were wide open so to speak. Anyway, Mark gave me a motivational talk at how the race was up for grabs, and with this in mind, I started running again. I had exactly 3 months to the day to get race fit.
Uni, life outside or running an a stint of “the trots” made me miss quite a large amount of training time, but I ran round the route three times prior to race day (plus various other runs), and after doing my last run on the Tuesday, I rested until Saturday to be fresh for raceday. 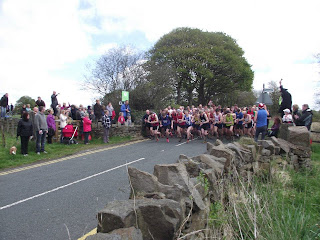 Raceday came, I rocked up at Belmont with my mum, sister and girlfriend who had come to support me, and pinned on my new Preston Harriers vest which had only just arrived through the post in time.I did a quick warm up (once round the Blue Lagoon) and lined up at the front of the start line. I spotted a few fast looking lads but accepted that I could only do what I could. No Darren Kay though which was a relief! 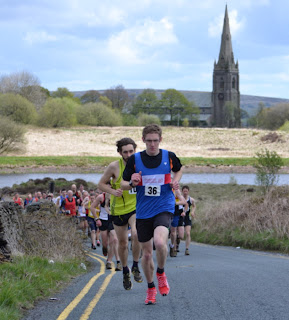 After a short delay the town crier sent us on our way. I accidently found myself leading the race down the road and did have a mini “OH SHIT” moment. I had a guy breathing down my neck and did consider just moving to the side and letting him pass, but I told myself to man up and grab the bull by its cojones and keep running.
After a few hundred meters you leave the road and start the first climb through the tussocks before levelling off onto what is usually a massive bog, but today was pretty standard considering the past couple of weeks of constant rain. I kept running, still in the lead and yet to dare turn round and see who was following me. In the distance I spotted Mark Birbeck marshalling…”COOOOOOOOMEEEE ON AL” he shouted. I said some sort of greeting or thanks to mark (I was in the zone so might have just said utter rubbish) and started the proper climb up Winter Hill. 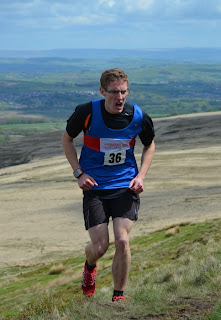 The last time I reccied the route I gave up and had a sit down three quarters of the way up, but today I knew I had to run it all and at a descent pace and push on at the top. I was blowing out of my arse here as people say, and Dave Woodhead of the Woodentops fell races has captured this in an absolutely awful photo. Here I let myself have a quick look behind, and Id managed to pull a pretty big lead.
I levelled off and set off in search of the bogs. My watch beeped to tell me id competed a mile, and my legs were telling my Id completed about 10. I could here somebody coming behind me, and a lad from Bury AC passed me with ease. I tried to stay with him, but he was too quick for me. The bogs over Noon Hill slowed him down and I caught him up again, but also allowed Nick Leigh of Pudsey and Bramley to catch us up. The three of us made it through the bogs and they started their race of their own as I held a solid 3rd.
We reach Georges Lane, the cobbled track that skirts Winter Hill. The two lads in front had zoomed off ahead, and I could see a lad behind me starting to catch me. I wanted to push on here and try and run at a good pace, but I held abit back knowing what was coming.
You leave Georges Lane and head back onto the slopes of Winter Hill and begin to contour a pleasant sheep trop. I managed to pull away from Mr 4th place, and by the time Id made it to the base of the 2nd and final climb the front two lads were half way up. Hands on knees I pushed. Mick the Preston fell captain was there to encourage me. I dug deep and pushed my knees with my hands for all I was worth. By the time I got to the top I was goosed. Its not even that long of a climb, but it beasted me. 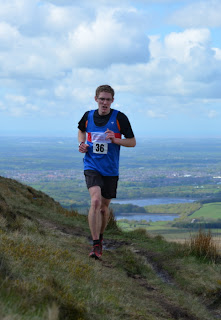 I actually spoke out loud, telling my legs to work, to which a middle aged man gave me a strange look. Its now a case of legging it back down the first climb and back to the finish. I know from my previous reccies that I can fly down this if I keep to the right. I passed Mark again who gave me more encouraging words, and continued on. 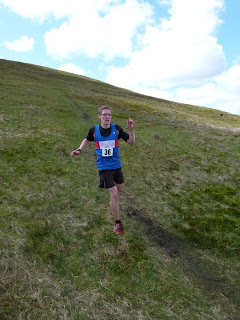 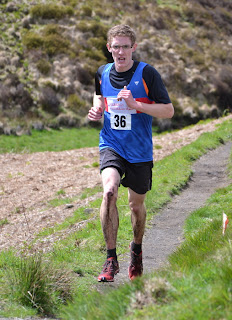 This last bit is a blur. My legs were gone and I just wanted it to end. You run along a nice path, pass the blue lagoon, cross the road and thank the police for halting the traffic and run round the field into the finish.
3rd/113 finished. Nick Leigh wont it in 34:19 and I bagged 35:13. 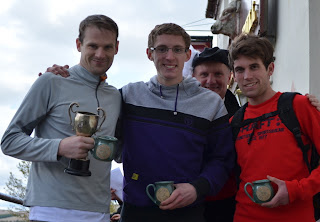 Thanks to everyone who encouraged me in the build up to my “comeback race” and the kind words following the race.
But my biggest thanks of all goes to Mark Birbeck. Without him and his such huge faith in me, I probably wouldn’t even have raced.

Anyway, onwards and upwards.
Posted by Unknown at 16:35